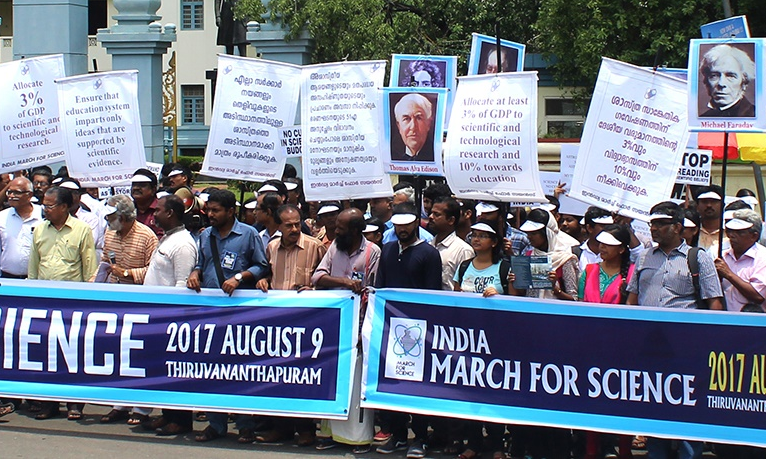 Appeal by Scientists and concerned citizens

Friends,
The mission statement of the March for Science voices the aspirations of lakhs of scientists, researchers, science communicators, students and public-at-large who have taken part in the two earlier Marches conducted across hundreds of cities and towns around the world and India. The statement champions robustly funded and publicly communicated science as a pillar of human freedom and prosperity.

In fact, the overwhelming and enthusiastic response of scientists of most countries has indicated that almost everywhere, science is being either disregarded or undermined, with policymakers pursuing policies that ignore scientific evidence; and in the chase of short term economic gains, financial support for fundamental research in science is dwindling at an alarming rate all over the world.

India March for Science joins the science communities across the globe to call for science that upholds the common good, and for policymakers to follow evidence-based policies in the public interest. Inspired by the huge participation in the earlier marches on 9 August 2017 and 14 April 2018 in about 40 cities and towns across the country, we propose to hold the 3rd India March for Science event on 9 August 2019, in the spirit of celebrating science and promoting scientific temper.

Contributions of the Indian subcontinent to philosophy, art, music, literature, astronomy, mathematics and medicine date back to several millennia and are recognised the world over. In fact, Einstein said gratefully: ‘We owe a lot to the Indians, who taught us how to count’. The great Indian schools of thought, viz., Sankhya, Mimamsa, Vaisheshika and, of course, Lokayata, contain outstanding elements of philosophical insights.
However, ignoring these genuine contributions, making unsustainable and unsubstantiated claims about an imaginary past has become a growing trend. Attempts to undermine well-established evidence-based scientific theories, such as Darwin’s theory of evolution and Einstein’s theory of relativity, are being made even from such time-honoured platforms — traditionally meant for evidence-based scientific exchange — as the Indian Science Congress. Fake news is being relied upon, and fake narratives are being spun and propagated by some policymakers at the Centre and at State levels. Unscientific ideas and superstitious beliefs are being spread and, in fact, have been gathering pace since Independence, in direct violation of Article 51A of the Constitution.

Actually, countries that have shown consistent and commendable research output are characterized by significant public investment in R&D and education. These countries spend around 6% of their GDP on education and 3% on S&T research. India, on the other hand, spends below 3% and 1% respectively, and this trend has gradually worsened over the years. As a result, a large section of the country’s population remains illiterate or semi-literate; our college and university system is reeling under acute shortages of infrastructure, teaching and non-teaching staff, and of funds for carrying out research. Science-funding agencies, like CSIR and DST, pushed into acute fund crisis, are unable to disburse even committed support to students and to research projects. Thus, adequate financial support from the government and equitable distribution of resources between Centres of Excellence, Central Universities and State Universities are a dire need today.

And finally, it is now an established canon of governance that all decisions that impact people’s lives should be based, not on personal beliefs, but on scientific evidence. Therefore, such policy decisions should be taken through consultations with the scientific community by involving the scientific bodies like the Science Academies.

Towards this end, the scientific community of India continues to press for the following demands:

The global March for Science has expressed solidarity with the India March for Science proposed on 9 August, 2019. We urge you to join the March and even help organize it in your city or town. It is not just a march for science. It is a march to save and define the present and future of our people.