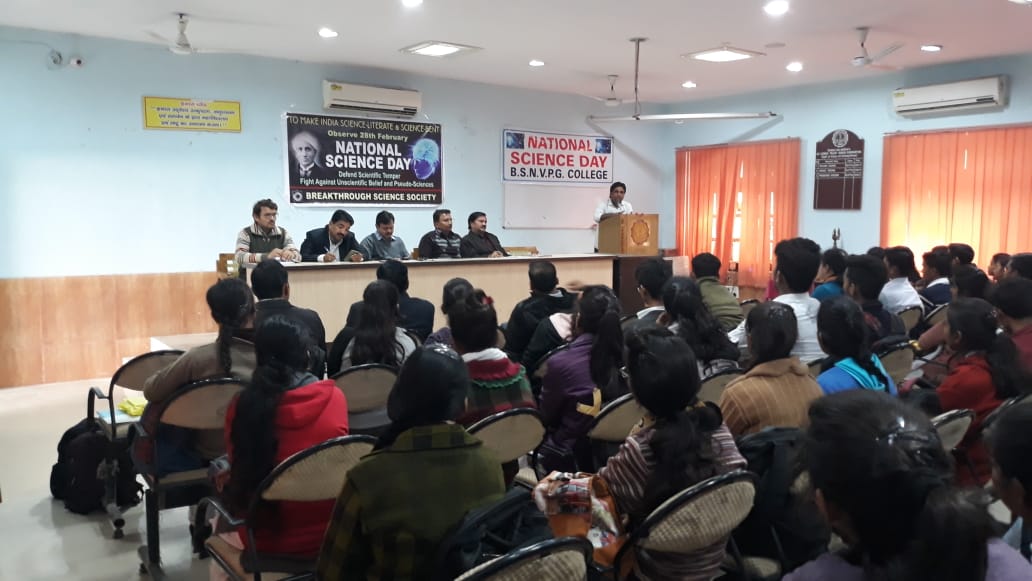 A weeklong celebration of the National Science Day was organised all over the country from Feb 20 to 28, 2019, on the theme ‘Make India Science Literate’. Various programs like seminars, talks, discussions, science experiments demonstration, video presentations and exhibitions were organised in schools, colleges and local science clubs. A brief report of the programs in different states is given below.

Feb 20 – A seminar was organised on “Science and Scientific Outlook” at The Vivekanand School, Narela. More than 200 students and teachers participated.

Discussion on the topic “Make India scientifically literate” and documentary show “Cosmos” at Mayur Vihar Phase-1 on March 3 and at Bhalswa on March 4.

Feb 28 – National Science Day was celebrated in Namchi Government College, Kamrang. Students as well as staff from different departments participated. The program consisted of an interactive discussion session and a quiz competition.

A Photo exhibition on C. V. Raman & Raman effect and Interactive experiments explaining the basic principles of Physics and Chemistry were also conducted.

Feb 23 – A discussion was held at Ramuna town in Garhwa district on “Science and Scientific Temper” and a science club was formed.

Feb 28 – National Science Day was observed by ‘Students Science Forum’ in the Senate Hall of HNB Garhwal Central University, Uttarakhand. A documentary show on life and works of C V Raman and Giordano Bruno were shown.

A discussion was conducted at Aminabad Mahila P G College, Lucknow. A part of the film on COSMOS’ was also screened.

On the occasion of Science Martyr’s day group discussions were held at Raypur, Koriya, Dhamtari, Bilaspur and Durg.

Feb 28 – Seminar at Physics department, American College, Madurai: Prof Yogarajan, BSS state committee member, spoke on the History of Science. Students from 5 colleges participated and enacted mimes and skits on the life of great scientist Galileo and also against superstition.

National Science Day was celebrated in different districts of Kerala with a variety of programs.

Science Day programs were organised at

Previous Post
Why Was The March for Science Necessary?
Next Post
G S Padmakumar memorial public lecture on ‘Science and Society’