In the electrical power distribution system, the electrical energy generated has to be consumed at the same time since electrical energy cannot be stored in large quantities. This means that the generation (supply) and consumption (demand) of electrical energy has to be balanced always. Our power generating stations are interconnected to form a network called ‘power grid’. The specified frequency of our power supply is 50 Hertz. If the generation of electrical energy is more than the demand, the grid frequency increases. If the generation is less than the demand, the grid frequency decreases. For the stability of the grid the variation of the frequency has to be limited in the range of 49.95Hz to 50.05 Hz as specified by the Central Electricity Regulatory Authority. If the frequency variation goes beyond this range,power generating stations trip and that has a cascading effect, leading to a total failure of the power grid called ‘blackout’. If that happens, 2 to 3 days are generally required to restore normalcy in the power grid. There are Load Despatch Centres (LDC) at the national, regional and state levels to monitor the demand and the supply of power so as to ensure stability of the grid. If the demand is less, generation has to be reduced and if the demand is more than the generated power, load shedding has to be implemented by switching OFFsome of the supply lines.

In normal situations, the gross pattern of the load variation is known to the LDCs, and they control  generation accordingly. But if the demand for power is suddenly reduced beyond a limit, it can cause instability in the power system.  The ability of the power plants to respond to the demand for increase or decrease of generation depends on the type of the power plant. Hydro-electric and gas-based power plants can respond quickly. But much of the country’s generation is based on thermal power plants which cannot vary their generation quickly. Sudden decrease in load may also cause over-voltage, which may damage equipment. This is normally countered by switching capacitors and reactors on and off, but the existing systems were not planned by considering the possibility of a huge fluctuation. That is why there is a real danger of grid failure.

In conclusion, whether the turning OFF of lights at 9 PM on 5th April, 2020 will cause instability in the power system depends on how effectively the LDCs are able to implement the preventive measures, possibly by phased load-shedding before 9PM and restoring power over a long time.We feel that the call to switch off lights at 9PM was given without taking the technical issues in consideration, and may have detrimental effects when the entire country is struggling to fight Covid-19. 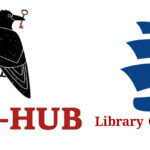 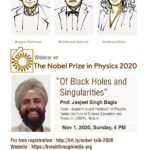 Webinar on Nobel Prize in Physics 2020: ‘Of Black Holes and Singularities’ 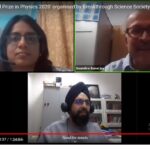 Webinar on ‘Nobel Prize in Physics 2020’: ‘On Black Holes and Singularities’