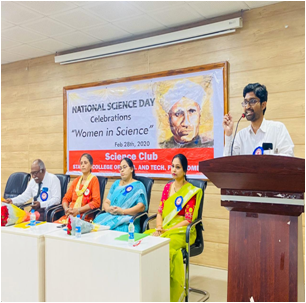 On Feb 28,  a seminar was organised at Hindi Mahavidyalaya Degree College. Ch.Murahari, Advisor BSS state chapter and Mr Hemasekar,  Assistant Professor, Methodist college were the speakers. They spoke on the role of science in the development of the society. They also expressed their concern about the science education becoming career centric in the present  day education