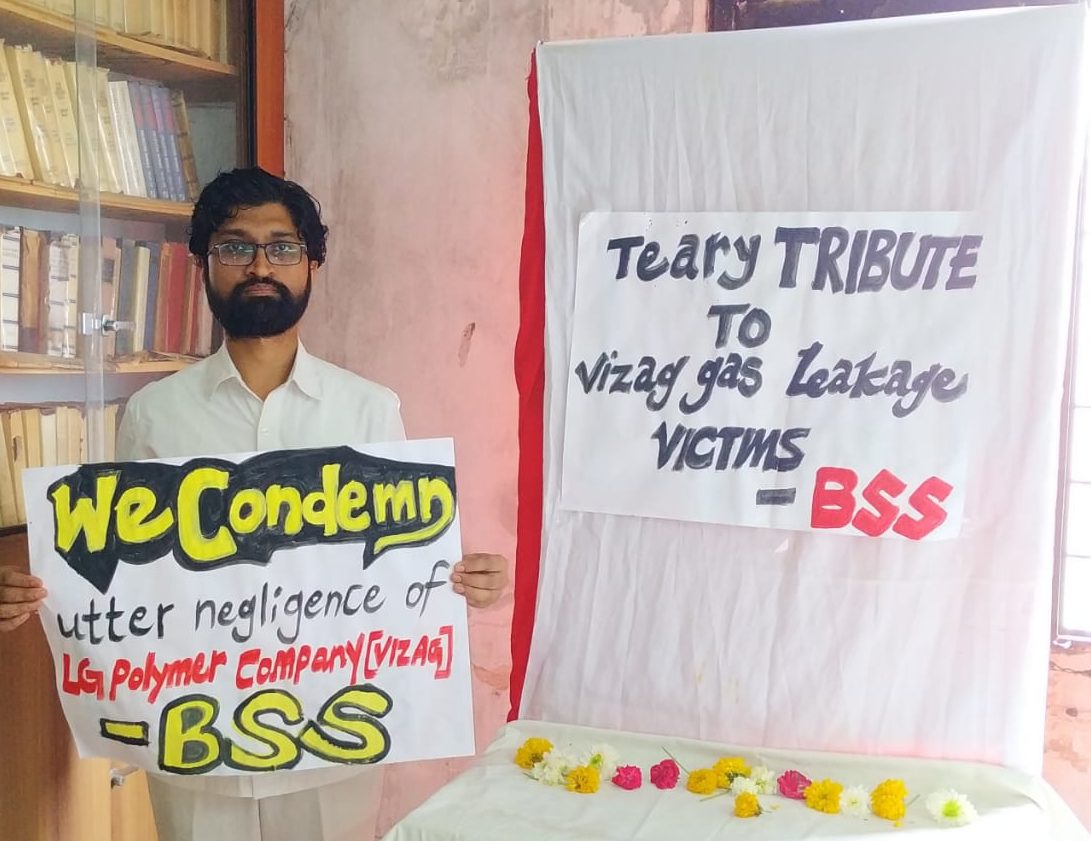 The Breakthrough Science Society Telangana State chapter Organised a Placard holding protest program at state office Hyderabad. BSS AP&TS incharge Prof.R,Gangadhar attended the function as the main speaker and Mr.Devarshi Gangaji, president Hyderabad committee presided over the function. Prof. R.Gangadhar in his speech said: “Presently the people all over the country are passing through a very critical situation due to lockdown and Covid-19 pandemic. During this lockdown period, the horrific incident happened at L.G. Polymers Ltd. at Vizag, Andhra Padesh, on 7th May 2020 morning, where the styrene gas leak caused death of 11 persons and thousands of people have been hospitalized falling seriously ill.This poisonous gas leakage incident in Vizag reminds us of the Bhopal gas tragedy where thousands of innocent people of neighboring localities and labourers of this industry died due to methyl isocyanide (MIC) gas leakage from Union Carbide factory in 1984. This Vizag incident again proves that the central and state governments of our country do not take any lesson from the gas leakage tragedy in Bhopal, the deadliest in industrial history. The Vizag gas leak incident is but a mini Bhopal gas tragedy and neither the neighboring inhabitants nor the respective government authorities were aware of the hazardous chemicals used in such factories and their impact on people if any accident occurs. Breakthrough Science Society demands that the harmful effects due to gas leak from L.G. Polymers Ltd. should be combated on a war footing and the government has to provide free and quality health care for the victims of the gas leakage tragedy. We also demand a high level scientific enquiry on causes of the styrene gas leak and to bring the guilty to the book. Lastly we draw attention to the fact that in recent years many investors (foreign as well as Indian) are establishing hazardous chemical industries in different places of India. Many of such chemical industries are already banned in developed countries due to their dangerously toxic waste materials which cause environment pollution and destroy biodiversity. These investors do not get permission from the government and designated authority to establish such chemical industry in developed countries like USA, Japan, Germany, England, etc., while in India the investors get quick clearance and license from our government to establish such hazardous chemical industries without proper verification. The effort to buid a chemical hub in Nandigram, West Bengal by Salem Group and Dow Chemicals was such an example. We demand the government that the  hazardous industries must be situated at a safe distance from habitation as per the Hazardous Chemical Amendment Rules, 1989, and the environmental norms prescribed by the state and central pollution control bureaus should to be strictly enforced.”