The coronavirus outbreak has been labelled a pandemic by World Health Organisation (WHO). People are confined in their home. Scientists, doctors, and medical staff are working on war footing to save people. We are anxiously waiting for normalcy being restored. The young generation always takes a lead role at an hour of crisis, and have shown the right path throughout the ages. They are the torch bearers who ignite the ray of hope. In this situation the student community and science loving people can play an effective role through their creative ideas and initiatives. So, in the lockdown period we are taking up an initiative by which you may contribute small but significant ideas to the scientists and doctors to fight the coronavirus outbreak, and our nation will be benefitted from this batch of talented and scientifically educated young buds. This exercise will build scientific temperament in our society and here lies the significance of this initiative. We solicit your kind cooperation and participation in large number to make this endeavour a grand success.

END_OF_DOCUMENT_TOKEN_TO_BE_REPLACED 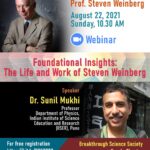 Webinar – Foundational Insights: The Life and Work of Steven Weinberg 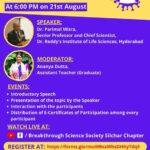 Webinar: “SARS-CoV2 and COVID-19: Where from and whither to”